back to nature - a new communication system 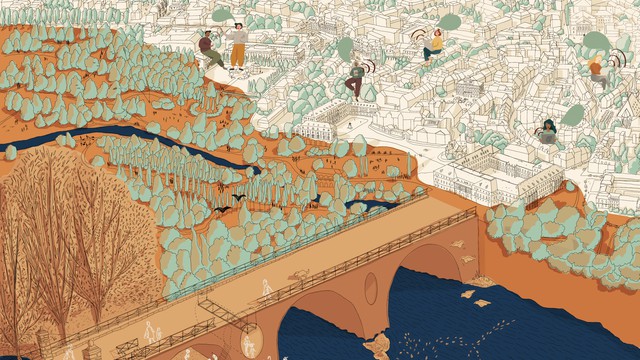 How to comprehend our nature as human-beings and our connection to nature in the sense of the ecosystem and our surroundings? Ec(h)o is not only a play of words, it is a play of the notion in human rediscovery of nature through sounds. Building an emotional bond as a manifestation and a bridge to a nature-protective behaviour, ec(h)o responses to both the concerns of climate change and the problems that arose in the preserved heritage landscape Park at the Ilm in Weimar, Germany.

The widespread definition of nature consisting only of the plant and animal kingdom and the humans as its own entity is being challenged with the envision: could communication exist among them? If humans could talk with their defined nature, how would it sound? Would it be a passive reflection of the same tune or could an exchange occur? Does it require merely a translation of one language to another? How would it affect the human perception of nature? Is there a need to push boundaries? Do these boundaries blur within this communication process? Ec(h)o is a modern approach of a temporary urban installation creating playful dynamics in the park as a living part of the city and as a public place. Designed to be as neutral and adjustable as possible to the individual regardless of belonging to which target group, including kids and elderlies, the installation encourages social sustainability and inclusivity to the participants. Instead of rejecting the digitalisation as an integrative part of our culture, this project explores the characteristics of the unnatural (man-made) and the natural (uninhibited), and merges them into an instrument bringing each participant closer to the core understanding and immersion into their surroundings and to mother earth.

Technical Concept : The communication system functions with a real time human sound input which is sent to be analysed. An answer or translation in the form of a nature sound will come back as an echo. This banter will continue back and forth with different results, imitating a real conversation. Building the communication system required firstly the collection of nature sounds which was recorded from the park. The result varied from bird tweets to the almost inaudible water droplets. The compiled sound library was entered into a database after performing a series of analysis running on python. The focus in this prototype lies on the frequency as a basic sound characteristic perceivable to the common hearing. The analysis of the real time input will then be compared to the database to look for the most similar nature sound.

Visual Concept : This project was created to be experienced in a tunnel under the Sternbrücke Bridge in the park. Within the pandemic situation, a physical prototype transformed itself into an interactive website. The urge to go out in the fresh air revealed our human nature, but we were left sitting in front of our screen, dreaming of places within reach. This misfortune nevertheless created an addition of a layer of complexity opening up a string of possibilities on scaling up the project to a collaboration work between expertise, users and creators, as well as to an expansion in geography, with the accessibility of the website from different places at once. These two scenarios are presented as a critical approach which poses a question rather than a solution. What is our reality: are we creatures of technology dependence, and are we losing the battle against our ego of superiority?